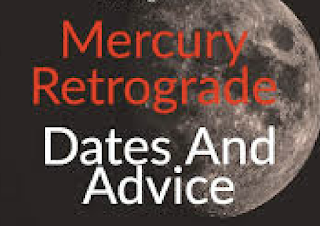 Mercury will be going Retrograde on February 16, 2020 at 12° Pisces and ends on March 9, 2020 at 28° Aquarius.  The Shadow of Mercury Retrograde began on February 2, 2020, so those that are sensitive may already be feeling some effects.

Many astrology followers refer to Mercury Retrograde with some level of Doomsday warnings.  However, just with all things, there are benefits and drawbacks.  When we learn to understand and appreciate Mercury Retrograde, we can move through the benefits and reap the rewards instead of finding frustration in the drawbacks.  It's like expecting a bird to swim underwater.  When Mercury is straight, there is ease of movement and wide open communication like a bird flying with the wind.  When it is Retrograde, communications and motions become like a deep water fish, slow moving, difficult to follow in the depths, often murky and misunderstood.  If you expect the deep water fish to fly about the tree tops, you're going to get super frustrated when it fails you.

What does Mercury Retrograde mean?!  The ancient Greeks associated this the planet, Mercury,  with the swift messenger of the gods, Hermes.  While Romans associated Mercury with Mercurius, the god of merchants, travelers, and thieves.  In astrology, Mercury is considered the planet of communication, small business, and local travel.  When Mercury is Retrograde communications and communication devices, including verbal, snail mail, electronics, computers, contracts... all will be strained, glitchy, and often misunderstood.   (My friends that are IT computer techs swear that they are busiest during #MercuryRetrograde with computer glitches and server issues!)  Be extra careful with legal communications, court cases, and contracts during Mercury Retrograde with require diligence in getting your point across with clarity! We read the contract several times.  Be prepared for delayed responses, or misinterpretations.  Be prepared and patient with clarifying yourself and asking clear questions to get an accurate understanding from others. Merchants, small business owners, travelers and deliverers of goods will often run into delays and difficulties as well.  When traveling, triple check your route, your reservations, check your oil and the air in your tires, have a plan B in case there are delays, unexpected construction, police traps, etc.  And ultimately, remember that all is in Divine timing and even the set-backs are for your overall benefit.  Stuck in the car with a friend or loved one? Perhaps its time for you to have that "talk" you've been putting off.  Sounds not too fun so far. So let's get to the plus side!

Why do I LOVE Mercury Retrograde? Okay, so if you know someone is a spy... then you don't have to be afraid of them, right?!  You can use the knowledge to your advantage! Same with Mercury Retrograde...  The BENEFITS of Mercury Retrograde are basically about looking into your past and using long lost joys, places, habits, and loves to forge a better future.  Mercury Retrograde is a great time to revisit old places that brought you great joy, seek out a long lost friend or old flame, and reminisce about younger years or your childhood for the things that inspired you before responsibilities, time and aging stole away your passions.  Do not be surprised if old lovers seek you out during this time, or you "bump into" an old friend you've lost touch with!

What do I do during Mercury Retrograde? Journaling and meditation are always good practices, but especially during Mercury Retrograde they are most helpful. Use your intropsective time to seek out elements (people, pursuits, habits, etc) that either we haven't let go of and no longer serve. Conversely, also rediscover those that brought great joy and magic, but we no longer make time to pursue.  Be mindful when speaking and be prepared to clarify.  Listen carefully and make sure they understood you.  Also listen carefully to be clear in what you are being told.  Repeat it back, to make sure you are on the same page.  Seek out old friends and old flames.  Do not be surprised if they find you first.  It is not uncommon to 'bump into' people from our past during Mercury Retrograde.   Go to old places that brought you joy.  Whether traveling in your memories, in meditation,  or actually physically going there, seek out what it was that you liked about the place and how you can bring that forward into your life now.  This may also be a really good time to isolate yourself from people who have been agitating you or weighing you down.  Do some soul searching as to what they are meant to teach you, and release old hurts to move forward with more ease when Mercury goes direct.

What not to do during Mercury Retrograde! This is not the best time to start anything new.  Computers, cell phones, electric appliances, and cars purchased during Mercury Retrograde will often not work correctly when Mercury goes direct! Wheee!  This is also not a good time to start any new endeavor, friendship or romance because it is likely based in miscommunications, and when clarity comes during Mercury Direct there may be much disappointment.  Life is all choice. So if you choose to start new things in a Mercury Retrograde, just pay attention and be aware of the possibility of limited longevity.  Any contracts that you sign, read over and over, and make sure there is a clear "out"clause.  Any big purchases that you have to make, pay extra for the warranty.  You will likely need it.  Be mindful of arguments, sharp words, speaking thoughtlessly etc.  This is not the time for flippant comments, they will be taken as far more hurtful than normal.

Mercury Retrograde typically only last around 3 weeks, so hang tight and pay attention.  You may find that you enjoy this time of slowing down and introspection.

Your comments are greatly appreciated.

At the age of 11, Ariana's intuition led her first book on alternative spiritualities and visualization meditations. It was a book on the American Indian Spirituality of Shamanism. During those early years, she developed beginning interests in the arts of Astrology, Numerology, Kabbalah, and Feng Shui. These studies would be carried through the rest of her life, and became expounded upon with studies in Holistic Health, Naturopathy, The Artists Way, Qi Gong, Energy Healing, Colored Light Healing, CHIOS Energy Healing, Reiki, Access Consciousness, Ancestral Clearing & Forgiveness Work, Meditations in many fields, Aromatherapy, Herbology, Crystal Healings, Vibrational Energy Work, Tuning Forks, Singing Bowls, working with Angels, and opening the Intuitive Senses.

To learn more about Ariana's work, see her class schedule, or to book a private session visit: https://namastehealingarts.com/

TRUNCATED LEGAL DISCLAIMER: The contents of this website and all affliated websites / pages are for Spiritual and educational purposes only. This information is not intended to diagnose or prescribe medical or psychological conditions nor to claim to prevent, treat, mitigate or cure such conditions. In presenting this information, no attempt is being made to provide diagnosis, care, treatment or rehabilitation of individuals, or apply medical, mental health or human development principles to provide diagnosing, treating, operating or prescribing for any human disease, pain, injury, deformity or physical condition. The information contained herein is not intended to replace a one-on-one relationship with a doctor or qualified health care professional. Any techniques the author or publisher address only pertain to the underlying spiritual issues that may affect human well-being. For a complete version of our Legal Disclaimer visit https://namastehealingarts.com/legal-disclaimer